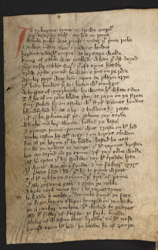 Manuscript Laud Misc. 656, the preferred witness of "The Siege of Jerusalem"

The Parsed Corpus of Middle English Poetry (PCMEP) is one of my major corpus construction projects. The long-term goal is to include 1 million words (though that goal may still be more than a decade away) so that we may better study the development of English between c. 1150-1400. I have now included a new text, the late fourteenth century alliterative poem The Siege of Jerusalem. (Click on the link to see the documentation for the text.) It brings the corpus another 10,000 words closer to completion.
The Siege of Jerusalem is a very difficult poem to parse, perhaps the most challenging text I have included in the corpus yet. It alliterates, which means that the stressed words of a line begin with the same kind of sound, as illustrated by the depiction of a violent battle excerpted below:

('Hewed on the heathens, / dash violently together // Tore to pieces gilded shrouds, / shattered mail coats. // Brooks grew bloody / all about in the valley // and gushes from golden garments / like gutters they flow') (ll.557-60).

It took about 8 months of on-again-off-again parsing, usually about a page a day, until the text file had been completed. It was tough, but also a lot of fun. On to the next Middle English text!